Tigers are dangerously close to being poached into extinction. There are fewer than 4,000 wild tigers left in the world, and across the wild Bengal range in India, Nepal, Bhutan, and Bangladesh, where 70% of tigers still roam, they remain under attack by organized gangs who trap and kill them for their skin and bones.

Why this cruelty? The demand is huge for tiger parts used in Chinese medicine, and tiger skins are coveted as a status symbol. Tiger farms in China and Vietnam feed the demand and perpetuate both legal and illegal trade. Now, for those who can afford it, wild tigers are seen as the ultimate prize—more potent, and more desirable. 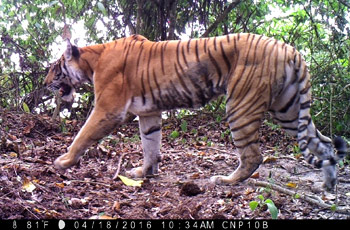 In Chitwan, Nepal, camera traps take ‘tiger selfies’ to help monitor the tiger population.
“Tigers are now virtually extinct in Cambodia, Laos, and Vietnam. There is a black hole right in the heart of tiger range countries... The great tiger reserves of India and Nepal remain shopping malls to satisfy a demand thousands of miles away.” – Brian Weirum, Fund for the Tiger

We're fighting tooth and claw to save these magnificent cats. Meet our two partners in the field:

In Nepal, The Fund for the Tiger has set up anti-poaching patrols along a tiger habitat and smuggling route in Bardia National Park. In coordination with park staff, these Community Based Anti-Poaching Units rally local youths to patrol for poachers and raise awareness around Bardia. In 2016 a patrol routed out a suspicious gang carrying snare traps and other poaching paraphernalia.

Camera traps have been set up in Chitwan National Park to take photos of tigers (tiger selfies!) to help monitor their movements and numbers.

The Fund for the Tiger works together with the Wildlife Protection Society of India (WPSI) to deliver a big impact for their size. Run by the fearless Belinda Wright, WPSI is at the forefront of disrupting the wildlife crime trade through a network of informants and by taking legal actions against poachers in the courts. 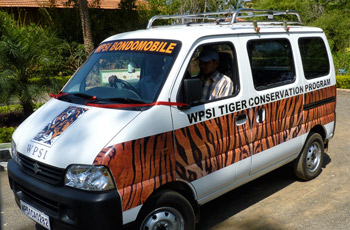 The Bondomobile vans have earned their stripes, screening films about conservation in villages near tiger reserves and talking to communities about how to coexist with their 400-pound neighbors.

In 2011, WPSI and The Fund for the Tiger launched “Operation Bondomobile.” Tiger-striped vans, courtesy of David Bonderman, travel to villages along critical tiger corridors in India, screening wildlife films and offering rewards for information. The Bondomobiles have reduced corruption among forest officials and encourage villagers living near tiger habitats to see wildlife as an asset rather than a threat. They’re up to three vans now, reaching tens of thousands of people every year.