Donations to STOP Girl Trafficking are currently being matched! Click here to give now!

After the first ascent of Mount Everest by Edmund Hillary and Tenzing Norgay, the spirit of their achievement was heralded around the world, attracting thousands of trekkers and climbers to the Khumbu region. The feat shone a spotlight on Sherpas, who were honored for their kindness and strength on the mountain. Yet, in the shadow of the world’s tallest peak, life for them was as it had been for centuries. They lacked basics like clean water and electricity, and there were no schools or clinics.

One of AHF’s very first partners was Sir Edmund Hillary and his Himalayan Trust. For 30 years, we worked together to improve lives in every corner of the Khumbu, giving thousands of children an education, supporting clinics and hospitals, restoring Buddhist monasteries that are the heart of Sherpa culture, and building infrastructure that makes life at high altitude less demanding. The late Sir Ed is no longer with us, but our work with Sherpas continues today, giving them a future while preserving and honoring their culture and identity.

"I believe that of all the things I have done, exciting though many of them have been, there's no doubt in my mind that the most worthwhile have been the establishing of schools and hospitals, and the rebuilding of monasteries in the mountains." – Sir Edmund Hillary 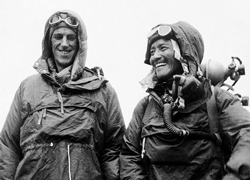 A few hundred years ago, a group of Tibetans crossed over the Himalayas to settle in what is now Nepal. Called Sherpas, which means easterner in Tibetan, they lived in isolation on the rugged south shoulders of Everest. A legend told that the first man to climb the world's highest mountain would be one of their own. On May 29, 1953 Tenzing Norgay stood with Sir Edmund Hillary at the top of the world. The legend had come alive.

More about Sherpas and Everest 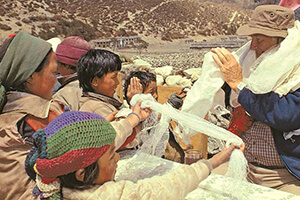 Sir Ed and the Himalayan Trust

For over 30 years, we have partnered with Sir Ed's Himalayan Trust on projects throughout the Khumbu: building schools and hospitals, bridges and clean water systems, reforesting hillsides, and restoring sacred sites.
Read more 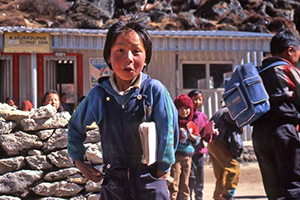 The focus of our work in the Khumbu is education, still the best hope young Sherpas have for a better future. And by attending school close to home, they are better able to preserve Sherpa language, culture, and traditions.
Read more 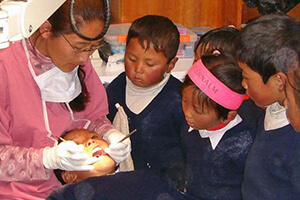 Namche Dental is the world’s highest dental clinic, and the only dental care facility in the Khumbu. Visiting trekkers with toothaches are also welcomed, and that’s a good thing—it’s a looong hike to the nearest city.
Read more