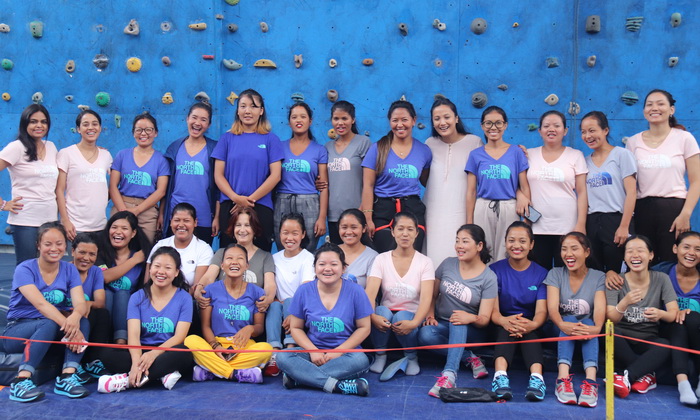 Twenty-five STOP Girl Trafficking alums and Friday Teachers just took part in a two-days outdoor education and leadership training led by Dawa Yangzum Sherpa, a North Face athlete and Everest and K2 summiter. This Outdoor Peak Experience was made possible through the North Face’s Move Mountains program, created in memory of long-time TNF leader and dear friend of AHF, Ann Krcik, to encourage the next generation of women explorers and role models. 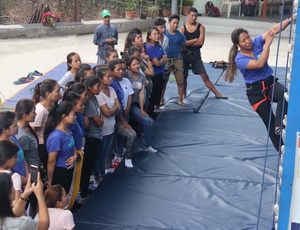 Dawa showing the girls how it's done

The girls in STOP Girl Trafficking come from poor, low caste, and broken families in rural Nepal. These alums were all once in danger of being trafficked or forced into child marriage, but now they are young women with real futures, often the first member of their families to finish school. Most have only seen the outdoors as a means of going to and from school or work in the fields, so experiencing it through the lens of teamwork and confidence was unprecedented. And it wowed them.

Dawa started with the story of her journey from a poor girl in a remote mountain village to a famous international athlete.

“Growing up I just wanted to climb and seek new adventures. But as a woman, everybody discouraged me from following my passion, especially climbing mountains. My family did not stop me, but they did not support me either.

Almost all Sherpa guys learn to climb by going to the mountains and working as guides assistant. But since I am a woman, no one would agree to take me to the mountains. Therefore, I took the only option that was available, and that was to leave the village and leave my family behind, and go on my own, and go wherever I could take climbing training courses. I was only thirteen years old then.” 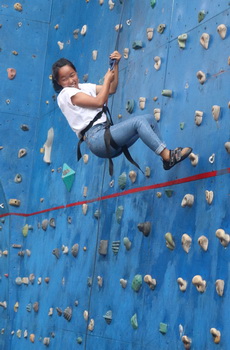 Bimala after her successful ascent

The SGT alums were, quite literally, on the edge of their seats. And, as Dawa listed all the summits she has reached and her other climbing achievements, they were in wonder that she, who started out like them, had accomplished so much.

The girls then got to take turns on the climbing wall – and did really well! Two of them made it to the top of the most difficult section of the wall, including Bimila who said, “When I first saw the wall I was scared, but Dawa’s thorough preparation, training, demonstrations and encouragement really inspired me. And then I got to the top of level 4. I felt so proud of myself!”

Dr. Aruna Uprety, founder and president of SGT, even took a turn. “I also did it, and enjoyed it too much. And the girls really did so much and enjoyed so much more, than I had expected. At the end, we were tired but full of energy.”

Aiti from Ramechhap said, “It was incredibly motiving. To hear Dawa’s story of coming from a small village like mine, in the mountains, to achieving all that she has done is inspiring. She taught me that if I am determined, focused and strong, I could achieve my dreams too!”

And, afterwards, Dawa posted: “What a blessing to share my story with these amazing young women. They have all gone through so much difficulty in life, and yet, they are so cheerful and have such an amazingly positive and yet practical attitude to life. I was asked to share my life story to inspire them when in fact, they inspired me more.” She was so impressed that she wants to take some of them up to the mountains to gain more experience at the Khumbu Climbing Center (founded by AHF board member, Conrad Anker)!

Many, many thanks to the North Face, Dawa, Aruna, and huge kudos to all the SGT grads who weren’t afraid to step out – both by trying climbing and taking control of their futures.

Check out more pics of their adventure below

Dawa, showing the girls how it's done
Bimala made it all the way to the top of the hardest part
Aiti, who is also from the mountains, was inspired by Dawa's story
Aruna had fun testing her climbing skills too
Dawa doing what she does best
Dawa and Aruna at the RHEST office