Donations to STOP Girl Trafficking are currently being matched! Click here to give now!

Ravaged by time and climate, Upper Mustang’s magnificent Buddhist artifacts were crumbling and monuments were in disrepair. In 1998, AHF began a project 600 years in the making. Season by season, using the same patience and skill as the original 15th-century artisans who created these masterworks, AHF's team of carpenters and wall painting conservators set to work bringing Mustang’s treasures back to life.

As more than a hundred Lobas were trained in the art and science of conservation, the temples of Mustang were slowly and steadily reborn: roofs skillfully replaced, twisted structures straightened, and from the soot, grime and varnish emerged astonishingly beautiful wall paintings. Half a millennium from their creation, AHF has helped pull these priceless treasures back from the brink. And as gompas came back to life, revealing their beauty and splendor, the Loba community began to take pride in their heritage, becoming the foundation of a thriving cultural renaissance. 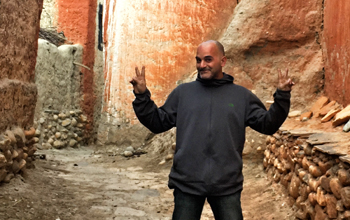 Our commitment to preserving the ancient Tibetan Buddhist culture of Mustang isn’t limited to restoring sacred art and architecture—the gompas are only fully revived when they are filled with living practitioners. At the time, Mustang’s largest monastery had but a dozen students, no secular teacher or instruction, and the students, monk teachers, and elder monks lived in wretched conditions. Today, Lo Monastic School has 80 students, a full curriculum, and a sterling reputation.

AHF supports several schools for both monks and nuns, keeping centuries of tradition alive and well by nurturing new generations of Buddhist scholars. Monks and nuns are again asked to perform household and community prayers and can be seen constructing sand mandalas or carrying religious texts through the fields while chanting prayers for a bountiful harvest. And the long forgotten rain ceremony and festivals like Tiji and Yartung have been revitalized and are now regular events.

Tashi Delek! Thank you so much for joining us for our first virtual Infamous Annual Dinner, Nourishing the Soul & Staying Connected in 2020. There was a little technical glitch in the beginning, so if you missed anything, you can watch it at your convenience here.
Read more

In 1994 the Gyalpo (King) of Upper Mustang asked us for help. He, and the people of the ancient Kingdom of Lo needed its heart, soul and strength revitalized so that their culture could be brought back from the edge of extinction.
Read more

We feel deeply privileged to be entrusted with your support and belief in us. It makes everything we do possible.
Read more