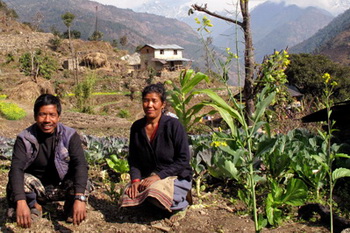 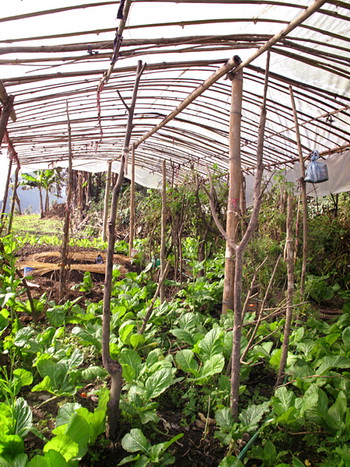 The village of Lamidanda, in the Dolakha District, lies under the shadow of 23,400 foot Mount Gauri Shankar. It’s a beautiful part of Nepal if you are a trekker. Not so much if you are an almost landless, illiterate farmer with three children, debt, and no idea how to get your family out of a very deep hole.

Three years ago, that was reality for Prem Bahadur Thami and his wife, Urmila. That is, until they were asked to join Community Action for Development (CHAD), a local organization funded by AHF to help farmers improve their lives through agriculture and animal husbandry.

Prem was the first in his family to own land. Three years ago he earned enough cash doing construction work to qualify for a loan, bought a small plot of land, and built a house. Before then, he lived in a hut owned by his landlord, sharecropping in the landlord’s fields for half of the harvest as payment—minus, of course, rent and any other deductions the landlord saw fit. This was the way it had been for generations.

When Prem began farming for himself, he started with the same crops he had raised as a sharecropper: maize, mustard and potatoes. But that was barely enough to feed his family for half of the year, and it left nothing to sell—until CHAD stepped in.

Two years ago, they provided Prem with vegetable seeds, a small, shared irrigation system, technical support for using organic fertilizer and insecticides, and guidance on how to plant, care for and harvest high-priced products like cauliflower, cabbage, peas, tomatoes, and chilies. CHAD even helped with marketing, introducing him to wholesalers who purchase Prem’s harvest for resale in the local bazaar.

The average household income from farming prior to CHAD’s intervention was about $14 per year. But during his first year as a CHAD farmer, Prem earned about $250 through vegetable farming. Last year he increased his earnings to $600. The extra income has allowed him to pay off over half of his loan, and he aims to be debt-free in two years.

There are 571 farmers like Prem in three locations throughout Dolakha, and each of them has recorded substantial increases in income. For 73-year-old Hari Bahadur Sedai, the benefits extend beyond the tangible:

“It has also given me something to do in my retirement. I’m too old for construction work, or to plant and harvest rice and maize, but I love gardening and am very grateful to CHAD for giving me such skills so late in life. And, the grandchildren enjoy eating fresh vegetables. CHAD has taught us to stagger planting, and to grow things off-season, so even from our small plot of land we have income coming in most of the time. Enough even to give the children a little money for some treats now and then.”

For 50 very poor families without enough land to farm, CHAD provides support for goat breeding. CHAD purchases nanny goats and a buck or two for communal use, and they help with the purchase of vaccinations, medicines, and guidance on how to care for them.

CHAD supports the farmer groups for three or four years. It’s likely that none will ever make a fortune, but having enough cash to make ends meet—with some leftover for the occasional treat—is something their fathers could only dream of. 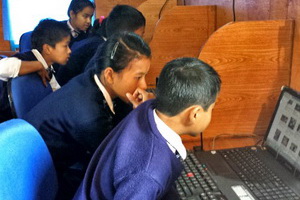 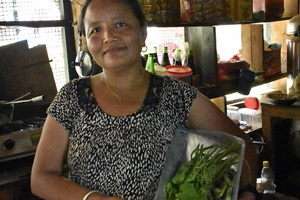 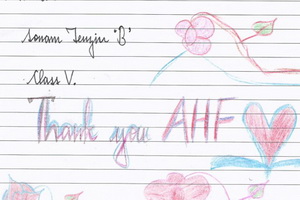