High in the hills outside of Darjeeling, life just got a little easier for the kids at Sambhota School. The primary school, with attached hostel, is the only chance for 78 poor Himalayan children from far-flung villages to get an education.

Sambhota's very capable headmaster, Kelsang Dawa, left in 2008 to oversee another school. When he returned to Sambhota last year, he discovered that time had taken its toll on the school and asked AHF for help. We were happy to support some long-overdue improvements. 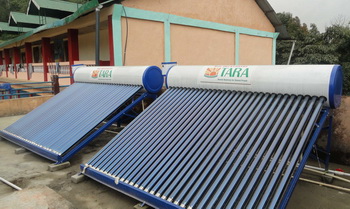 Solar water heaters mean no more frigid baths!
As I express my gratitude to you and the AHF, I will never forget that the highest appreciation is not just to utter words, but to live by them. – Kelsang Dawa Headmaster, Sambhota School

I am glad to write to you about my school which your foundation, the AHF, has been consistently supporting with so many different projects for the past several years.

In 2005 the school was facing severe water crises. The staff members and students all had to spend at least three hours a day fetching water. The health and hygiene of children was in very poor condition due of lack of safe drinking water. It was AHF who rescued us from this very harsh water crisis when the foundation accepted to sponsor the Drinking Water Project.

Since completion, there has been tremendous improvement in general health and hygiene of all the residents at school. Most of the water sources that were found and used much later have already dried up, but the water at our source is still overflowing as I write this report. Thus, I have no hesitation whatsoever, to put in record that of all the projects that we have received from various organizations over the past 36 years, the AHF funded drinking water project stands the most important project of the school.

Prior to the [recent] installation of the solar water heater, most of the younger children in hostel would run away from bathroom even for a Sunday shower (once in a week). It used to be all the more difficult to convince children to take bath during winter months. Many children would even not wash their face properly in the morning.  Scabies and other skin diseases were very common all through the year. All of these personal hygiene problems in the hostel are now a thing of the past. In fact, children love spending time in the bathroom because they have abundance of running hot water all year.

The Children’s Park renovation was most loved by the junior students of school, who regularly use the park during their free times. We fixed [the play equipment, sourced from a shut-down school] and created a new park.  The entire equipments were painted in colorful designs. The floor surface of the old park was completely covered with soft river sand to prevent children from getting injured.  This project has not only given a facelift to the school but has more importantly brought smiles in the faces of junior members of the schools.

The old shelves in the hostel dormitories where children kept their uniforms, toiletries and other daily use items were all damaged and disfigured. Most did not have proper lock, doors were broken, racks bent and paints disfigured. The AHF was very kind to fund the purchase of 12 new [lockers], bigger in size and better in quality. All the boarders now have their own storage spaces to keep personal items.

The toilet construction project for boy’s hostel and for staff members at office block has indeed been very helpful for both the boys as well as for the staff members.   And school guests no longer need to travel a distance and use children’s toilet.

The roof gutter of the school’s main hall, the hostel’s shed and the office roof had become obsolete due to rust and [began leaking], which posed serious danger to the foundation of buildings. However, with the kind donation from the AHF, the school could replace all the old gutters with the new ones made of heavy duty PVC material.

As I express my gratitude to you and the AHF, I will never forget that the highest appreciation is not just to utter words, but to live by them. I assure you that I and my team will continue to do our best for Sambhota School and its students who you support so selflessly and with genuine concern.

With prayers and highest regards,