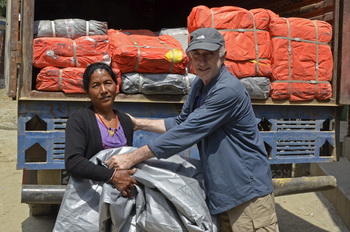 Last week tarps became available again. A friend of a friend helped us secure over 125,000 square feet of strong, waterproof material. We also found a truck to transport it, a car to transport us and, miraculously, the road to Kahule was free of landslides. So early Sunday morning we loaded up and headed out again, this time to deliver shelter to the members of our United Women’s Savings and Loan Organization (UWSLO).

The five-hour drive took us through lower Nuwakot, past damaged homes and tent cities. We were approached once by potential looters, but when one of the volunteers explained that it wasn’t aid and that I was just a foreign journalist covering a delivery paid for by people up in a village, the lie was enough to deter them.

The last three hours were along what would generously be called a track: over two landslides and 5,000 feet up the mountains of Nuwakot. We were met by Maya Devi, founder of the women’s co-op, and a group of very, very thankful villagers. Maya Devi started crying, apologizing that her village was being ‘such a nuisance’ to AHF of late. I assured her otherwise.

The tarps were unloaded into a storage room near the abandoned UWSLO office for later collection. They would call the members in small groups—at times like this bringing together large numbers of people is best avoided!

After the delivery, Maya Devi took us on a short tour. Not a single house is inhabitable and the school is in ruins. While some villagers had started to repair their homes so they were no longer dangerous, most were living outside under plastic-covered bamboo greenhouses—materials AHF had bought that were meant to be protecting tomato vines and other vegetables, not farmers and livestock. The distribution centers they had built as part of the vegetable enterprise were razed, stored seeds and equipment destroyed.

The money earned from their harvests was modest but life-changing for these rural Nepali women. Fortunately they haven’t given up on growing vegetables, but it’s on a much smaller scale for the time being.

As we were leaving for our five-hour return journey, a young daughter of one of the members arrived with gifts for us—one large pumpkin and two small ground apples. They were most graciously received!