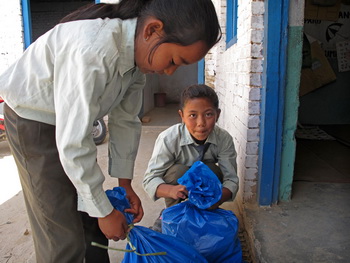 The Chuna Devi School is located in the once picturesque village of Maha Manjushree, in the hills above Bhaktapur.  While not totally decimated as other areas were, most houses sustained considerable damage and all of the girls there in STOP Girl Trafficking and their families are still sleeping outside under tarps.

The girls shared their stories of where they were during the two quakes and what has happened to them since. Miraculously, none of their family died or was seriously injured. Most of the girls were able to recover some of their belongings—clothes, books, school bags—from their homes. Unfortunately this wasn’t the case for Ranita. She was the only girl in the group who was not in her school uniform. It is buried under the rubble of her home which collapsed completely. She cried while telling us, and it brought tears to her mother and a few other girls as well. She was quickly comforted by our local volunteer, Sano Baba, who explained that we would look after her and find her a new uniform.

Raju Dhungana, a teacher at the school, told me he and another teacher had just completed a week-long intensive course in psycho-social counselling. They were tasked with observing the children and offering support when needed.

“For the first week at least, there will be no formal lessons. The students will attend school for only a few hours a day where they can play, sing and dance, talk about their experiences and, by doing so, try to remove some of their fear. The first stage is to offer them some distraction from what has happened over the past month.” Raju told me.

In a stroke of good fortune government engineers, after a thorough inspection, stuck a large green notice on the school walls: the building was deemed strong enough to be occupied again.