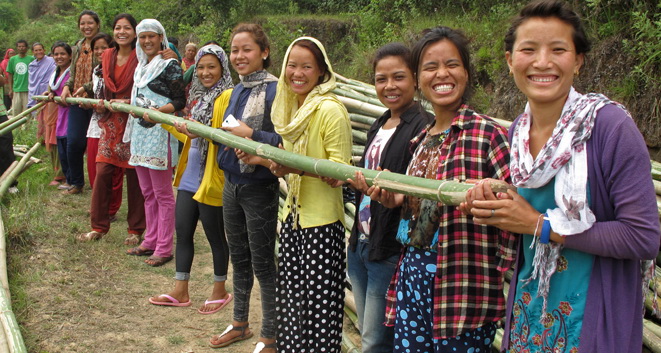 Reena Tamang and Gita Adhikari had had enough. They were among the twelve young women from the Chhampi/Dukuchhap chapter of STOP Girl Trafficking alumnae whose homes, like most others in the area, were wrecked by the April 25 earthquake. The first few nights they slept under the open sky. Then weeks passed in leaking, makeshift lean-tos built from the debris of their homes. Reena and Gita got the other alums together, recruited a volunteer, and sent us a proposal: they wanted to build more comfortable and secure shelters for their families, the families of girls currently enrolled in SGT, and any in the area who really needed their help—in total about 100 families, over 500 people. And AHF was more than happy to oblige.

I met the alums at what used to be Reena’s home. Once a two-story, eight-room home, it was now a pile of rubble. Reena, her parents, elder brother and sister-in-law have been sharing one small space in a crude shack made from salvaged tin and wood.

The group delivered their first shipment of bamboo poles and tin sheeting to the village of Chhampi, enough for ten shelters. “Procurement was so very difficult,” Reena told me. “There is such a shortage of building materials and the prices change every day. We went to the supplier a number of times, and finally, at 10pm yesterday we were able to load up the truck.”

Before distributing the materials, the villagers gathered and Reena and Hom Tamang, the alums’ volunteer, assured them that this was just the first of a number of deliveries. They introduced me to polite applause and a khata. But when I reminded them that all of this was thanks to the twelve young graduates from the SGT program, and that AHF was immensely proud of them for taking the lead in their community, the villagers’ appreciation was loud and genuine.

Krishna Laxmi Maharjan and Asmita Desar, SGT alums from a different chapter, came from across the valley to observe their sisters at work. We can expect a similar proposal from them soon!