Shree Krishna Ratna Ganga School before the earthquake: there were four blocks of classrooms, including a science wing, teachers’ rooms, and offices surrounding a large playground.

Before April 25, Krisha Ratna Ganga High School was the largest government school in the town of Chautara in the district of Sindhupalchowk. The central block collapsed completely during the first earthquake, and the others were so badly damaged what was left of them had to be demolished. There were over 1,300 students enrolled in the school. Fortunately, the earthquake occurred on a Saturday when the school was closed, so there was no loss of life among the school population. 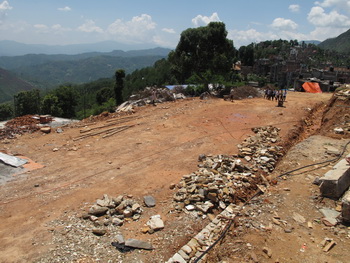 KRG High is one of seven schools we “adopted”, and last week an AHF volunteer and I joined our partner RHEST (Rural Health and Education Service Trust) to distribute school supplies—uniforms, pens, pencils, geometry kits, and notebooks—to the students. In addition to school supplies, RHEST has also constructed 12 temporary learning centers (TLCs) at the school, providing students in grades three to six with safe spaces to learn. Principal Rajendra Kharki told me the RHEST TLCs were the “best of the lot,” as the design made allowances for the monsoon season’s heat and humidity. RHEST has erected over 50 TLCs in other schools in Sindhupalchowk and neighboring Ramechhap.

Before the distribution, I met with Srijana and Sushila, two grade 12 girls who have been part of STOP Girl Trafficking for five years. They are also “Friday teachers,” helping younger SGT girls in their studies during special afterschool classes on Friday afternoons. They agreed with the need for every student at the school to be part of SGT, at least for a year or two; after the quake most families’ financial situation sunk to a very low common denominator. 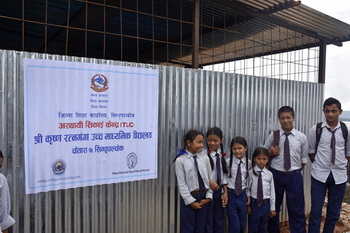 Srijana and Sushila, like nearly all of the students at KRG High, live in temporary tin shelters, usually with only two rooms and sharing one latrine with another family. There are 9,440 girls (and a few boys) in the same situation, under RHEST’s care throughout the seven districts most badly affected by the series of quakes and aftershocks that began in April. Vulnerability is a strong incentive for traffickers, and hundreds of thousands of families were made much more vulnerable after the quakes. AHF and RHEST aim to almost double the number of girls in the program from these areas, and the task is a daunting one. Many of the villages are remote and difficult to reach, particularly during the monsoon when landslides block what are, even in the best of times, rudimentary dirt tracks. One RHEST team, in search of additional girls at risk, visited village schools in Makwanpur, requiring a six-hour hike through the hills, walking from school to school, and sleeping over at the schools or at a teacher’s home before making the six-hour trek back.

Despite the trauma and hardships the girls (and boys, and teachers, and parents) have and are facing, their strength and endurance never fails to impress me. Even in the temporary classrooms, the boys are still rowdy, the girls still coy, and the teachers still enduring. The parents who visited KRG High while we were there were joyful and thankful for our support, not a sign of desperation or hopelessness. When Dr. Aruna Uprety, RHEST’s founder and leading light, expressed surprise at the high spirits of the girls considering everything, Sushila replied “we have to maintain a positive mental attitude, or else we will all go crazy."