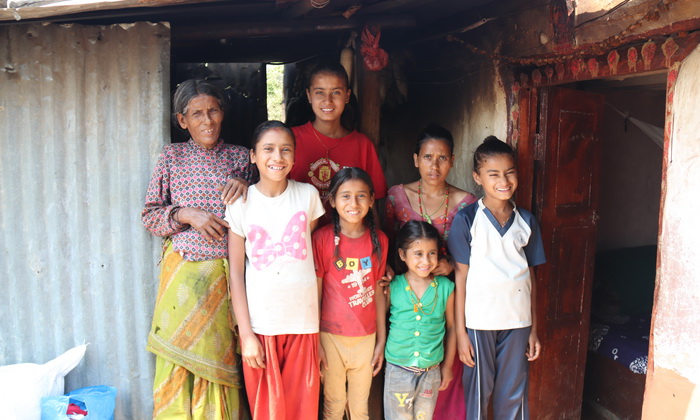 Dr. Aruna Uprety and I walked to a small home to meet five girls and one tiny grandmother. Even for STOP Girl Trafficking, this was a special situation. The girls are sisters and cousins who were abandoned by their fathers, the woman’s two sons. The youngest girl was in third grade, but so stunted by malnutrition that she looked to be four years old. All had suffered abuse, neglect, or both.

Aruna told me that, despite their extreme poverty, the girls looked much healthier than when the oldest first joined SGT, and she thanked their grandmother profusely for taking such good care of them. The five girls are all part of the big SGT family now and, thanks to the love and support of a woman who never had the chance to set foot inside a school, are doing well.

As we traveled to other homes, we heard stories – from families who had lost everything in the 2015 earthquakes, from SGT girls’ mothers who had been married off and started having babies when they were still children themselves, from girls who had been abandoned and were being raised by kind relatives, and too many about alcoholism and abuse towards women. There’s still a lot to do.

But we also heard from SGT girls who were at the top of their classes, with big dreams for their futures. We saw families beaming with pride at their daughters. This is real change – for the girls, their villages, and communities – and it means the old tragedies do not need to be repeated.

Because of you and STOP Girl Trafficking, 12,000 girls from rural villages across Nepal are safe in school. They’re learning to read and write and think for themselves, and to look to the future with anticipation, not dread. And they want to give back. It made me teary, and hopeful. I cannot imagine a better gift you could give them.