Tiger numbers rise, but so does poaching

It was recently announced that tiger numbers have risen by 22% in the last five years, the first increase in a century. A cause for celebration, but the numbers are still startlingly low: there are only 3,850 wild tigers left in the world. Though the increase may be due in part to improved surveys of tiger habitats, it also proves that these elusive cats will flourish if given protected habitats and left alone.

Sadly, there’s another side to the story. Poaching, too, is on the rise across the Bengal tiger range in India, Nepal, Bhutan, and Bangladesh, where 70% of the world’s remaining wild tigers live. In India, more tigers have been killed in the first five months of 2016 than in all of 2015.

So what's driving this demand? Tiger farms in China, and now Vietnam, supply tiger parts that are used in traditional Chinese medicine, with the side effect of perpetuating both legal and illegal trade. The more tiger parts flood the markets, the more normalized their use becomes. Tiger skins are a status symbol. Tiger bone wine is purported to ease pain. And for those who can afford it, wild tigers are seen as the ultimate prize—more potent, and more desirable. 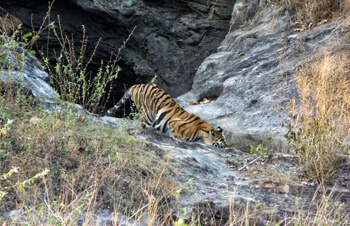 “My jeep came around a corner after hearing some tiger calls and alarm calls from sambar, and there was a young 20-month-old sub-adult laying on the road wapping his tail. After some time he got up and went down into the gorge known as Sita Mandap and drank from the waterhole. That was the first time in my 20 visits that I have ever seen a tiger do that.” – Brian Weirum, Fund for the Tiger

In a world that has aspirin, this is tragic and unnecessary. Our partner Brian Weirum at The Fund for the Tiger has been giving voice to these endangered cats for 20 years, saying, “Tigers are now virtually extinct in Cambodia, Laos, and Vietnam. There is a black hole right in the heart of tiger range countries and an insatiable giant, China, looming to the east. So the great tiger reserves of India and Nepal remain, as they have for 25 years, shopping malls to satisfy a demand thousands of miles away.”

The Fund for the Tiger is fighting back. In 2011, with the support of David Bonderman, they launched an awareness program in central India codenamed Operation Bondomobile. And the program has really earned its stripes—literally!

The Bondomobile, a tricked out A/V van painted with tiger stripes, makes stops at villages near tiger reserves, screening a film on tiger conservation and talking to communities about how to coexist with their 400-pound neighbors. The program has been so successful, they’re up to three vans now, reaching 226 villages—almost 50,000 people—this year alone. The vans are also putting a dent in corruption, spreading awareness about rewards offered by the Wildlife Protection Society of India for intelligence on wildlife crimes. And it’s working, with 45 alerts in the first half of this year.

Brian said, “Overall the tigers continue to do well amidst great turmoil and change.” There’s so much more to do, but it’s comforting to know that there are champions like Brian and his team, laying the groundwork to save these magnificent cats. 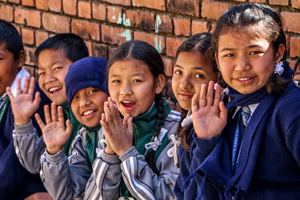 No shortage of joy at Navjyoti School 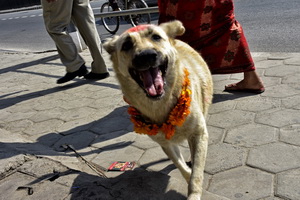