Sanjita: 3 years and a world of difference 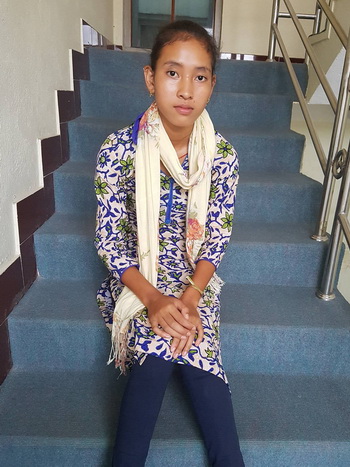 Both of her parents suffer from chronic illnesses and cannot work, so they had to depend on Sanjita and her two older sisters to support the whole family. Her father sold their land to pay for her eldest sister to take a course in community medicine, which let her open a small pharmacy in the village. The income from her store is helpful, but meager.

Sanjita’s other sister dropped out of school in grade 9 to marry. Sanjita could easily have followed that path – or worse. Her village is in an area of Nepal frequented by traffickers. She could have fallen for their siren song of a better life, only to end up in a brothel in India or in a bar in Kathmandu.

Then, in 2015, earthquakes destroyed the family’s small home.

Luckily, one of Sanjita’s classmates, who was already in STOP Girl Trafficking, saw her struggling and recommended her to SGT. After an evaluation of her situation, Sanjita was enrolled in grade 8 and life became a little easier for her and her family.

Last year, Sanjita sat her grade 10 exams and did well. She then had to choose whether to go on to the last two years of high school (called “college” in Nepal) or straight into vocational training. She understood that training would make it easier to find a job, and applied to the B & B Hospital’s nursing school in Kathmandu (founded by our own amazing Dr. Banskota of HRDC), and received a scholarship!

With her school fees taken care of, and SGT supporting her boarding costs, nothing stands in the way of her completing her education. Sanjita’s once-uncertain future is now transformed.